Do Dating App Algorithms Work? Here's Why They're Often Wrong, According To A New Study 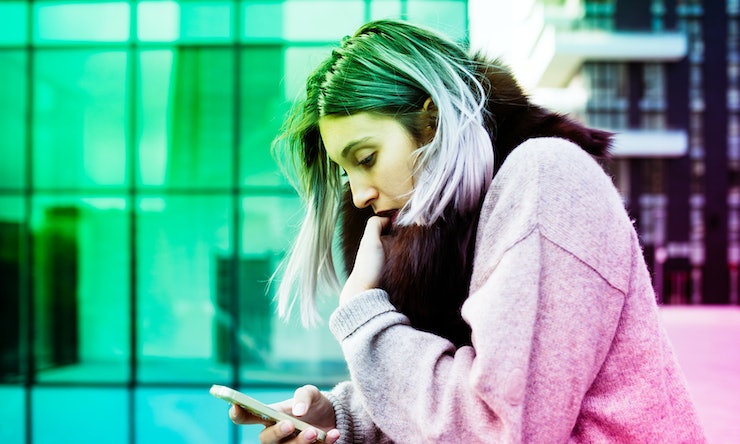 If you've ever felt like your 90 percent matches on dating apps are 0 percent matches in real life, it's not just you. A new study in Psychological Science has found that dating app algorithms can't predict how much people actually like each other once they meet. Does this mean we shouldn't even be paying attention to those match scores?
For the study, researchers from the University of Utah, the University of California, Davis, and Northwestern University had people answer over 100 questions on things that have been proven to correlate with what they want in a partner, like their politics and what kind of relationship they're looking for. Then, they had everyone meet through four-minute speed dates. They predicted the likelihood that people would want to go on another date using one of the most effective algorithms available and compared these predictions to the actual outcome of the speed dating event.
None of the answers to the questions were able to predict how likely two people were to want to date. It could only predict how many people they liked and were liked by in general. "These results suggest that compatibility elements of human mating are challenging to predict before two people meet," they concluded.
However, the study's lead author, Samantha Joel, told The Cut that while these questions may not predict who hits it off, they could give dating app users valuable information about whether or not someone's right for them in the long-term.
Most dating apps don't know how good their algorithms are because they don't ask users whether they went on dates and how their dates went, Dale Markowitz, a former OkCupid engineer, tells Bustle. So, most dating apps optimize their algorithms based on how much people press "like" buttons, message each other, or exchange contact info, which may not predict actual relationship success.


However, Markowitz points out that four-minute speed dates may not be the best measure of how well the algorithm predicted compatibility either, since someone's willingness to date someone after a speed date will be based mostly on physical attraction. "Any algorithm that doesn't take into account physical attractiveness is likely going to be way off," she says.
Another issue is that a lot of dating apps ask questions that aren't actually proven to predict compatibility, says Markowitz. For example, some ask about personality traits like extroversion and openness that might seem like they predict people's compatibility but aren't proven to. The traits that do matter can be unpredictable, which is why you see random questions on OkCupid like, "Do you like the taste of beer?"

"The idea is to throw everything at the wall — every possible question that could be related to romantic chemistry — and see what sticks."

"The idea is to throw everything at the wall — every possible question that could be related to romantic chemistry — and see what sticks," Markowitz says. And it seems like this approach has merit, because the questions that have worked the best on OkCupid aren't the ones you'd expect. The ones with the most power to predict long-term potential are "Do you like horror movies?," "Have you ever traveled around another country alone?," and "Wouldn’t it be fun to chuck it all and go live on a sailboat?"
Even then, people may not answer the questions honestly — especially on apps with questions like whether you'd prefer to date someone of your own race, how messy you are, and whether or not you're annoying.

So, dating app algorithms are probably good at predicting things like who will message or swipe right to who; however, when it comes to how you'll get along in person, their effectiveness remains unknown.